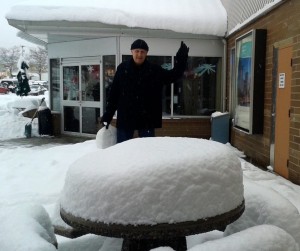 It is commonly said that in the medical practice one never stops learning, there are always new techniques, technology, therapies and even new deseases and challenges for the physicians but in my very personal opinion one of the ways through which we receive the most amazing lessons in medicine and life are our patients.

This weeks newsletter is dedicated to one of the bravest and most courageous human beings i have ever had the pleasure of meeting and who’s consent i have to share his story and clinical case.

It all started mid april 2014, it was later in the evening when l received a call from the emergency department of a prestigious hospital in Guadalajara, the call was about a patient that was on his way in from Manzanillo who had been dealing with gastrointestinal condition that recently worsened now making him very sick and in need of emergency medical assistance.

When he finally arrived to the ER a full assessment of his current condition was made and l came to learn that over 20 years ago he had been operated and his full colon was removed for a very severe case of Ulcerative Colitis which is a inflammatory desase of the bowel that endangers the life of those who have it. Then he was given an ileostomy which is a new juncture between the bowel and the abdominal wall so that his movements could go into a bag from which he recuperated just fine ind had lived ever since in pretty good shape. His recent issue started 1 week before we met, he had developed lack of output through the ileostomy and had been vominting and not able to eat or drink anything for at least 5 days treated in several medical facilities with medicine for Salmonella infection, Constipation and nausea medicine.             He also Mentioned that he had been dealing with a hernia near the site of the ileostomy for a long time. By then l started suspecting the worst.

Although he wasn’t in the best shape ever it amazed me how calmed and patient he was, he listened carefully and answered all my questions very precisely as if he was certain of what l needed to know and was giving me the right information to help me get my job done soon and in the best way, when he could not be completely alert and sure of the answers his wife who never left his side will comment and clarify information for me. By then the results were in and l confirmed what i had suspected was going on.

The peace of howell that had been in the hernia on the ileostomy site became incarcerated and extrangulated not allowing any of the stool to pass from the obstruction point making everything go back through the way in, it prevented him from eating and drinking anything for five days and unfortunately the loop of bowel involved had suffered lack of oxygen for so long that it necrotized and perforated, added to this bad scenario he had been severely dehydrated as you can imagine which lead him into  an acute renal failure and septic shock.

The only Option to try to save his life was to take him into the operating room and perform an emergency laparotomy to rescue what healthy bowel he had left and resect the injured one. My team and l struggled for 4 hours to dissect through the adhesions and liberate the incarcerated hernia, we resected bout 40 cm of necrotized bowel, reconstruct a new ileostomy and placed a mesh to repair the hernia that caused this in the first place, he was rushed into the ICU and a team of very well trained nurses and Doctors watched over him day and night. 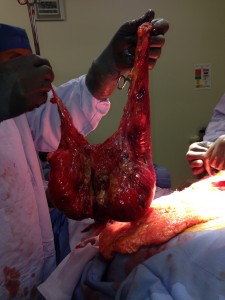 Every day l will spend long hours discussing with an intensive care unit specialist, Kidney specialist and a Cardiologist alternatives and other approaches to improve his health but unfortunately this whole episode seem to have taken all the strength he had left, the septic shock had spread through his system, besides the non responding kidney failure He also was unconscious almost the whole time, barely able to breath by him self and other organs had started failing as well, first his Bowel, then his liver and finally his heart and lungs. Laboratory testing showed worsening results every day despite the effort done by all the specialist involved getting us to the point in which we needed machines to take over him and replace the non functioning organs without certainty of how if ever he was going to come back from any of it.

Before this whole incident He and his wife spoke about their wishes should something like this happen and he was very clear that he did not wanted to have artificial life of a machine keeping him alive, this made it very clear for her that he did not wanted to continue on like this and as hard and difficult as it was for all of us, specially his Wife,  we had to cease artificial methods to run his body as well as any other testing that involved needles and pain. he was taken into a very nice and quiet room were he could spend all day with his family and for the very brief moments that he was fully awake he could talk and share thoughts with them.

Family flew in from USA and Canada and they all got to be by his side cheering and providing confort, despite the shape he was in he never lost his sense of humor and for the brief moments he was awake he could get a giggle or two out of the people beside him, me included and he never said good bye to anyone.

By the third day we noticed his vital signs continued to be stable, as incredible as it may be he was more alert and aware every day and his bowel seemed to started working, we asked permit ion to run new tests and it just looked like all of the sudden his body was starting to kick back in, day by day even the tinniest improvement was seen and he proved to us he was more determined than ever to come through this condition, by day 15 he was walking, eating and drinking, and his wounds and organs were healing slowly.

He struggled his way back from death, and got himself to the point in which he was strong enough to fly home and continue his recuperation to this day, planning in the future to come back to live in Mexico.

I am grateful for being a Doctor and witness first hand Medical miracles such like this, l am proud of every man and woman that has dealt with a severe medical condition and battle against it so bravely.

Medicine and Doctors can only do so much and come so far, from this very delicate line there is only what a human being and his will are capable of doing and l am amazed of how much courage and determination some patients have to come forward in this situations.

Thank you Mr Robert Forbes and Vivian Short for the honor to participate in your care, you have thought me and my team something that one can not read in books or medical journals. 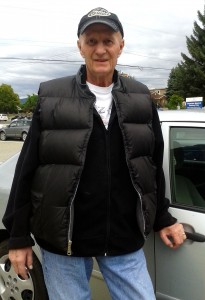